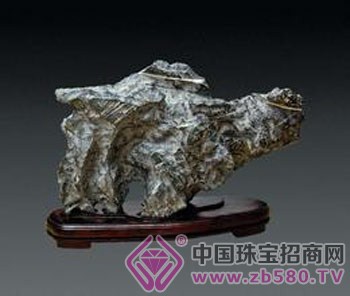 Lingbi stone is produced in Lingbi County, Suzhou City, Anhui Province, and is known as â€œChina's Four Famous Stonesâ€ in Xinjiang Hetian Jade, Bahrain Bloodstone, and Liaoning Xiuyan Jade. It is also said that it is comparable to Yingshi, Taihu Stone and Kunshi Stone. The overall concentration of the "slim, leaking, transparent, wrinkled, sturdy, black, sound, ugly, hanging" nine characteristics, and ranked first in the four stone, has been regarded as auspicious things by the people since ancient times, more loved by the scholars .

Lingbi stone is called Kistler and Qiaoshi. It will make different sounds of different heights and crisp and pleasant sounds. Therefore, Lingshi Stone is also known as "eight-tone stone", which is played on China's first artificial earth satellite. The "Oriental Red" music is played with instruments made of Lingbi.

Lingbi stone is mainly distributed in the foothills of the towns such as Yuougou and Chaoyang in the north of Lingbi County. It is the most famous of the Jinyun Mountain Stone. The famous Lingbi Stone is produced here. It is the origin of the authentic â€œeight-tone stoneâ€. . According to geological experts, Lingbi stone was produced in the Sinian period about 800 million years ago. During the Luliang tectonic movement, seawater flooding, marine sedimentation, ore formation, and later Yanshan to Cretaceous Yanshan During the tectonic movement, the volcanic rocks erupted and the magmatic rock geology appeared. The algae were mixed in the ore body. The algae were diverse in composition, thus forming a variety of patterns. Under the action of multiple crustal movements, the rock layers were folded. Breaking, and making a great effort to create a strange stone. In 1994, the relevant state departments tested the Lingbi stone, confirming that there is no radioactive, no harmful chemical components, and it is suitable for collection and enjoyment.

As for the types of Lingbi stone, it can be roughly divided into seven categories: vermiculite, dragon scale, multicolored, blue frost, transparent flower, white stone and white horse stone. Each type has several varieties, such as vermiculite and jadeite. There are many famous names such as gray ink stone, ruby â€‹â€‹meteorite, and three-flowered stone. The dragon scale stone is also called bowl stone. According to the color, there are red bowl snail, gray bowl snail, yellow bowl snail and green bowl snail. There are also more detailed classifications, some people have reached 28 categories, 196 varieties.

Since the reform and opening up, with the improvement of people's living standards and quality of life, more and more people have collected, enjoyed, researched and operated Lingbi, and the stone play market has experienced unprecedented prosperity. From 2004 to 2006, Suzhou City successfully held three consecutive Lingbi Stone Culture Festivals. At the same time, the monographs on the study of Lingbi Stone came out one after another. They formed the process, historical origin, cultural connotation and how to appreciate the Lingshi Stone. Collection, finishing, matching, naming, collection, maintenance, etc. have been comprehensively discussed, summed up the unique natural beauty of Lingbi stone with "shape, quality, sound, color, pattern" and "five major aesthetic elements", and upgraded Lingshi Cultural taste. At present, there are 3 Kistler Markets in Suzhou City and Lingbi County, and there are more than 1,500 large and small stone museums and stone museums. According to industry estimates, it does not include a large number of stone deposits in towns and cities. There are as many as 70 million pieces, worth about 30 billion yuan.